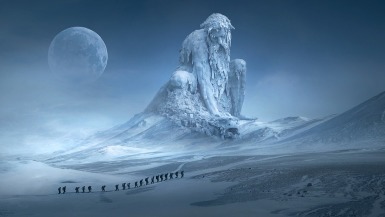 Want a much expanded book on worldbuilding and anthropology? Check out Build Better Worlds: An Introduction to Anthropology for Game Designers, Fiction Writers, and Filmmakers, now available on Kindle!

There are many blogs and books out there on world building. I thought maybe injecting a little anthropology in this process might help you with some of your writing process. After all, anthropology is about studying culture. But if you really want to know more about anthropology I have a page for that. I also sometimes answer questions on a variety of topics on Quora on anthropology and culture.

In particular, though, check out the episodes from Anthropology in 10 minutes or Less on ‘What the F*** is Anthropology’ and Understanding Culture. in order to get a picture of some of the basic elements of understanding cultures and how we study it.

Before I get into anything though, It is definitely possible to overthink things when you are writing. This is not stuff for your first draft, but rather it’s stuff for you to have stewing in the back of your brain while you are writing and for that second draft… or seventeenth draft… You might be useful to think a little about how worlds actually hang together.

Personally, I don’t plan anything. I am a pantser. Once in a while, a note occurs to me, but I can’t even be bothered to write stuff in order. Right now, in fact, I am writing parts of the 5th book of my series before book 4 is even done.

That being said, if you are one of those writers who wants to outline a world, this blog, and some future ones I have planned, might be helpful for you. Even if you don’t write science fiction or fantasy, it might be helpful to understand how cultures function for your writing process.

1. Worlds/Cultures are Integrated, Holistic and Ever Changing.

We hear that term Holistic thrown around all the time. But when it comes to understanding how a culture is structured, it means this: Everything about a culture is connected. That means, Politics, History, Art, Language, Economics, Religion, Family, Technology, Gender, Education and every other element interacts with one another constantly. No one single part of culture isolated.

It’s like the butterfly effect. You change one thing, you change everything.

Look around you. You can see examples everywhere. One right now is the thing you are reading this on. It could be a tablet, or a phone or a computer. It doesn’t matter which. How much has this technology changed the world? Consider how it’s influenced family relationships. Social media, for example, allows us to annoy the crap out of relatives with our political posts all the time right? Businesses, elections, religious organizations and so much more all use these technologies and are impacted by them.

If you are world-building, and something in that world changes, remember that everything is going to change. If for example, some kind of new magic is introduced, or some new technology comes around, you have to account for how that impacts the entire culture, not just one part of it.

Further, if your story takes place on a trade outpost in deep space, recognize that multiple cultures are going to influence other and cause culture change. Language and terminology will also change. Things like Pigeon Languages Appear.  Religious practices change. Catholicism in Central America is different than Catholicism in Australia. Why? Because the local cultures influence even the most powerful of institutions and cause change.

Think about your neighbor. How alike are you? How different are you? Now think about your siblings, your friends, your parents, your coworkers, or whoever is around you. Do you all have the same ideas? Do you all share the same political views? Religion? Sexual Preferences? Are they a cat person? Dog Person? Do they eat Sushi?

No culture/religion/political group/gender/race/class of people are all the same. People are variable.  That’s because people have different experiences and preferences. So if your universe has a group of cultist nutjobs who want to blow everything up, remember that amongst that group there will be people who have different opinions and ideas. Some of those followers might question what the leadership is doing. Some might be more devout than others. Hell, maybe this causes a major rift in the organization, opening the way for your hero to swoop in and pit two sides against one another or gain some valuable intelligence.

Trust me when I say this, with a history of doing research with people in the field, I know that getting people to agree on any one topic is difficult. Getting people to collaborate on a project, even when they actually do agree is difficult. There’s infighting, different political agendas, different expectations and perceptions as well as different communication styles. And that’s just within a single unified group. Throw in some diversity and you get lots of misunderstandings.

At the same time, people can only know and understand what they experience. So, even though individuals aren’t monolithic, neither are they free from cultural context. People are influenced by the history they are taught growing up, their religion, ideas of gender norms, class expectations, and so much more. I grew up Catholic and then left the Catholic church as an adult. That doesn’t mean that some of my thinking and experiences weren’t heavily influenced by the upbringing but it also doesn’t entirely limit my ability to make choices. It does, however, provide a frame of reference for how I understand the world. Certain characters of yours may have the ability to be critical of their past and their cultural context and enact changes, but not all of them will be able to do that.

Lastly, there is no such thing a monolithic evil group of people. Even within the Nazi regime, people tried to assassinate Hitler. Some worked to hide Jews or spied for the Allies. In the death camps, some of the administrators smuggled people out and resisted in other ways, Think Schindler’s List.

Which leads me to my next point…

3. Power and Resistance are really important

When we think of power, we have a tendency to think big. But power and resistance operate every single moment of every day.  Yes, this can happen in big, overarching, world-shattering ways. Or it can be as simple as an argument over who pays for a check at the end of a date.

In fact, in the classroom when we discuss power relationships, I ask the students to brainstorm the power dynamics involved on a first date. At first, students might have a tough time understanding what I mean, but the moment they realize that there are power dynamics in just about everything you do during that date, (Who pays? Who drives? Who orders? Who decides where you are going? Will there be a second date? ect.) hilarity ensues and the students inevitably bring up funny personal examples.

Within a culture, two things are constantly happening. People and systems are trying to either keep things as they are, or change them. An overly simplistic way of looking at this is Conservatives vs Progressives (I say overly simplistic because no one is 100% conservative or 100% progressive and people have complicated views on a variety of issues). At the very least, you should have forces in your world that are trying to maintain the established way of doing things, and forces that are trying to change them. So, in building your world, what are those things? And remember our lesson from #2, those forces are not monolithic.

4. Cultures spend a lot of time concerning themselves with ‘Purity’.

If you think about it, you’ll realize that most things you do are wrapped up in some kind of concept of purity. Take off your shoes before you go into the house? Purity. Wash your hands after using the bathroom? Purity.  Resisting eating that donut I found in the dumpster? Purity. On a more serious note, things like Immigration, Crime, Religion, Traditions and so much more are all debates about purity.

In fact, Law is a form of purity. It is the idea that in order to maintain society, we must have certain laws in place to protect ourselves. Anthropologist Mary Douglas wrote a book on this back in the 1960s called Purity and Danger. It looked at just how cultures construct and maintain these ideas. She analyzed the Book of Leviticus and the Hindu Vedas for her insights. You don’t have to read the entire book, in fact, the core concepts are in this nice brief video Summary of Anthropologist Mary Douglas Danger and Purity

Be wary the info dumping. It’s really easy to do. Introduce your concepts and ideas slowly throughout your dialogue and through your character’s experiences.  Take your time in introducing your world. A field researcher doesn’t see the entire country in one go, they travel across the landscape trying to make sense of how things are connected and why people do the things they do. If you overload your reader, they will, like a field researcher, go into culture shock and run away screaming.

One key thing I have noticed in worlds that are built well is that they start small and work their way out. For example, in Harry Potter, you are first introduced to Diagon Alley and Hogwarts. Each subsequent book introduces you to more of the Wizarding World so that by the time you get to the final book you know there is an entire planet full of Wizards, political organizations protecting Wizard Identity, Schools in other Countries and so on. If you’re writing a series, consider starting small, in one or two locations and then working your way out. This allows you to build slowly focusing on character and plot development rather than getting bogged down by World Building.

Alright, for now, this is enough but one last thing. Study worlds that work! (Read Read Read) I cannot stress this enough. Why does the world of Harry Potter work so well? Think of the concepts above. How about the World of the Dark Tower? The Hyperion Cantos? Hunger Games? Dune? (Can you tell my genre yet?) All of these worlds incorporate these particular kinds of ideas. Go back and really think about how these things are implemented in some of those famous stories. Then take a critical look at your draft version #566 and see how each of the four above concepts function.

The Seven Deadly Sins of Worldbuilding

The Perils of World Building

Also, if you like this blog, maybe, just possibly, check out my own unique world, about Giant Walking Cities.